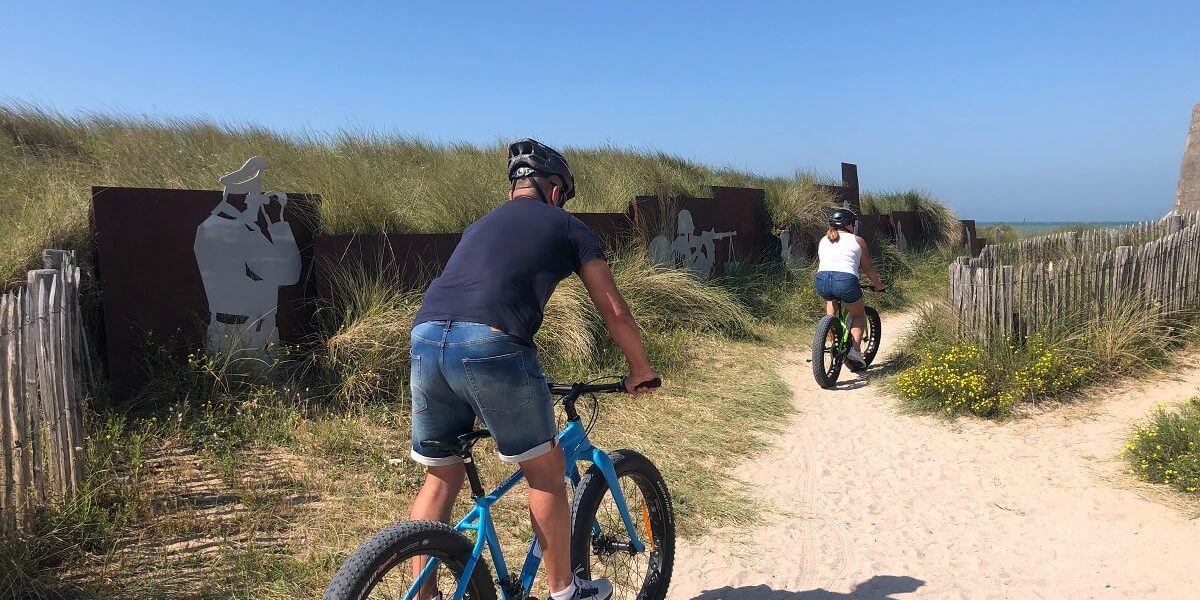 The Coeur de Nacre destination in Normandy has many assets that appeal to cyclists: a 12km coastline, fine sandy beaches, lush countryside, a rich memorial and historical heritage, not to mention a tempting gastronomy !

Thanks to its network of cycle paths, greenways and shared roads, the Coeur de Nacre is a great place to cycle around Calvados and more widely around Normandy. Combine sport and sightseeing !

During your holidays, for a weekend or for a sporting outing, discover our favourite cycling routes in and around the Coeur de Nacre. 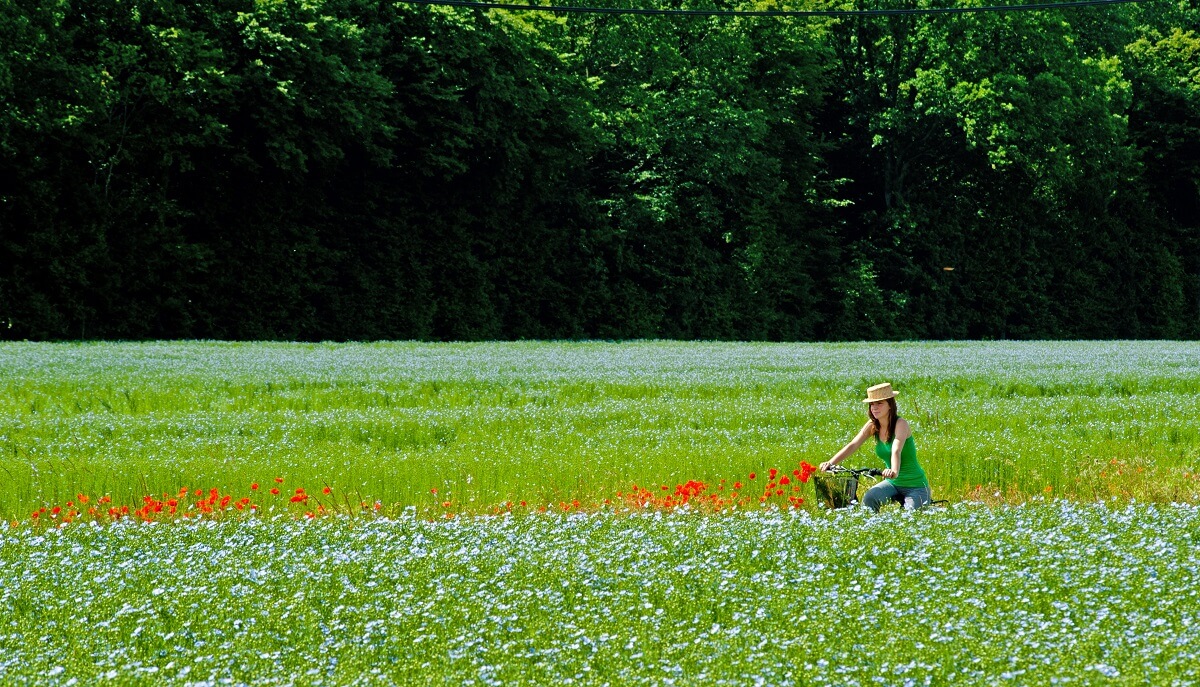 #1 discovery by bike of the seaside resorts of the Cote de Nacre, along the Vélomaritime

The Vélomaritime is the French part of Eurovélo n°4. The Normandy section of the cycle route runs along the coast from Le Tréport to Mont-Saint-Michel.

Head for the Cote de Nacre and the D-Day landing beaches on the Vélomaritime from Courseulles-sur-Mer. This cycle route is made up of shared lanes, cycle paths and other greenways and offers beautiful views of the seaside.

Things to see and do :

We like : enjoying oysters and seafood with a glass of white wine.

We like : walking along the sea wall to admire the small white beach huts that are emblematic of the Cote de Nacre.

We like : the mussels and chips lunch break comfortably installed on the terrace of one of the seafront restaurants.

We like : try water sports such as paddle or wing foil with Voiles de Nacre, sailing school.

We like : the cycle path which extends towards Sword Beach with a beautiful panorama of the Normandy coastline.

If you continue your bike ride along the Vélomaritime to Ouistreham, be sure to stop and admire the pretty villas along the beaches of Lion-sur-Mer and Hermanville-sur-Mer.

#2 immersion in nature, from the beach of Luc-sur-Mer

The Vallon de la Capricieuse is a 33-hectare green lung that stretches from the Luc-sur-Mer campsite to Douvres-la-Délivrande. The old railway line linking Caen to Courseulles-sur-Mer from 1875 to 1950 has been transformed into a greenway. It follows the stream “la Capricieuse”, which, depending on the season, has a dry bed or floods the surrounding fields. As such, it deserves its nickname of Capricieuse !

Why cycle along the Vallon de la Capricieuse ?

We like : the bike ride can be extended to Douvres-la-Délivrande. Take the Thomas de Douvre walk which follows the bed of the Douvette stream to the Baronnie, a former medieval stronghold which has been remarkably well restored.

Starting from Courseulles-sur-Mer and the Canadian sector of Juno Beach, you will inevitably think of the soldiers who landed there in 1944. The Vélomaritime leaves the seaside resort of Courseulles-sur-Mer along small roads that offer 360° views of the sea and oyster parks, passing the moving British Memorial at Ver-sur-Mer on Gold Beach. Plan a stop in Asnelles to taste their delicious home-made shortbread. Don’t miss a visit to the 360 cinema in Arromanches.

We like : the sunset on the cream-coloured walls of the British Memorial in Ver-sur-Mer and the breathtaking view over the Gold Beach area.

#4 The cycling loop from Caen to the sea

This cycling loop from Caen to the Cote de Nacre combines countryside landscapes and panoramic views of the Normandy coastline. You will pass through pretty little villages such as Fontaine-Henry, Basly and Tailleville. A large part of the route is on cycle paths.

Cycling loop from Caen to the sea

Not to be missed on the cycling route :

We like : Stop at Langrune-sur-Mer for a picnic or to drink a coffee on the terrace.

From Normandy to the Atlantic by bike

Guiding you from the Channel to the Atlantic, the cycle route La Vélo Francette allows you to savour sweet, gentle, traditional corners of western France as you cross the regions of Normandy, Pays de la Loire and Poitou-Charentes. Discover unsuspected gems along the way and fall for the charms of French country towns and villages as you get to know them by bike.

From one of the communes of the Coeur de Nacre, it is easy to cycle to the starting point of the Vélo Francette, Ouistreham, along the seaside cycle path.

Then, from Ouistreham, located on the British Sword sector of the D-Day landing beaches, you can cycle along the Orne canal and its old towpath, which has been converted into a 15km greenway, as far as Caen.

On the route, we stop to discover :

We like : a short stop to the Pointe du Siège, near Ouistreham : a protected natural area of the Orne estuary, this dune strip is home to 270 species of remarkable flora and fauna.

I discover the suggestions of loops and bike rides from Coeur de Nacre :